Hello Blogger. Dusting off the cobwebs out of nostalgia (and the fact blogger is free and I'm moving off of WordPress). So a lot has happened in these last few years.

To abridge it in short, I worked for two companies from 2015-2020. First one was short, doing game art for an Adelaide company. Second one was up my alley more, doing storyboarding for animated shows! I moved to Sydney for a few years. Yes, it seems like I was really living the dream for a few years there, working with Dreamworks for Netflix, even remotely from my beautiful hometown in Adelaide, South Australia for the last two years with permission. I felt like my art was improving every year, but still the memories of Calarts and Pixar lingered in my heart. Yet not so positively really, it was a painful time in retrospect, due to things that happened to me in my last semester. I have met all sorts of awesome people during this time across Sydney and Adelaide, and even via zoom conferences with the Los Angeles team (which I got to meet eventually in LA!).

In 2020 however, my precious mum died of brain cancer. It had been a short struggle of only a year from March 2019, before the condition worsened drastically and she lost the ability to move an arm, both legs and even to speak coherent words. My heart broke, to say the least. As as evident by this blog, my mom was one of the most cherished persons in my life, she was always there supporting me in absolutely every aspect of my life. She approached life with such stoic strength that always told me, when I was whinging, to "suck it up, princess". This unyielding grit was why she could watch her favorite shows and enjoy life her final few weeks, despite her situation being completely hopeless. 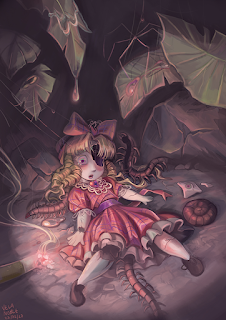 Centipede Doll
After her passing, I thought I was coping with the grief. I had been experiencing however, shuddering, shaking fear, my vision becoming blurred and a sense of being outside of my body, to name a few. Disassociating they called it. The GP gave me antidepressants for anxiety, but that wasn't the end of it. I experienced an acute case of Psychosis at the end of May 2020. Technically it was undiagnosed Bipolar Type 1 that made me predisposed to intense mania. After being hospitalised, tranquilized and chucked in a ward for 6 weeks, this incident threw my life off big time. To say the painful facts, it has impaired my ability to draw, or so I thought. I'm no longer working in animation for now, despite studios still messaging me. :(

Healing is a long, long road. It isn't chronological in a straight line, but has many ups and downs. I tried to heal my art brain for the next 6 months, but it was excruciating. The next year in 2021, I experienced what they call 'mania' in May yet again. This time, it was different. I went on a sparkling voyage across Adelaide, guided by spectacular visions---but hey, I promised I wouldn't bring over my weirdness from my past blog I've used to document these last two years.

In short, my thoughts on spirituality have drastically shifted. I'm no longer the hardened atheist I once was. It made me realise, I am going through these trials for a reason. This suffering will have a purpose, even if I can't see it in sight right now. I am lucky to have a super supportive family whom with money isn't an issue, and can keep a roof over my head as long as it takes to get me back on my feet.

This whole incident has come with piles of shame. Not being able to draw like this below image anymore? When you've worked so hard your whole life? A fate worse than death, right? 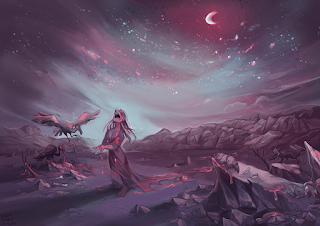 Dark Plain March
I've done other things during my time out of work, like make a visual novel or two, or three. I've worked on my writing skills through these projects.
Anyways, I don't know if anyone does blogger anymore. It's free and serves it's purpose though? I thought it couldn't hurt to turn back to it, despite guessing that many people have abandoned blogging for social media. I for one, am a bit weary of social media. I want to return to the internet basics more and more, and thus am editing my main site to leave WordPress.
It has been the hardest, most excruciating few years of my life. These last 2, soon 3. I've scared away people I thought were friends and been burdened with unbearable trauma, pain that I truly know I can't expect most people to understand. Over and over. Three years running I've had nightmares happen to me, only inside some of the darkness I've spied glittering spectral imagery. Things that have convinced me there is a realm above ours. Things that fill me with cosmic hope. So although I don't have such an extensive LinkedIn resume to gloat about, I've crafted a portfolio of both wonderfully glorious and morbidly dreadful life experiences. I've really been living, something deeper than can be achieved through pretty picture drawings. 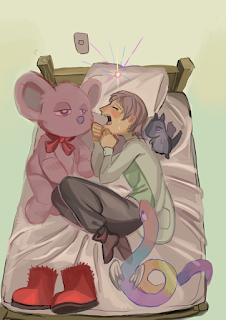 Crying in the Ward
After experiencing the brutality of people at Calarts, I was changed. I dare say with great agony, tainted. I hope I can return to this blog and remember the good times associated with college and high school. I have suffered from 'mental health conditions' since Calarts really. I don't want to ruminate on it too much, but positivity does not come easily to me anymore. Oh, I was so innocent and I let myself be hurt by the world. I'm a bit melodramatic as you may tell.
I seek to be strong like my mom was. My memory of her is unbreakable. I don't think you ever stop grieving. I'm pretty sure despite my misery, if she was around she would be quick smart to say "toughen up sweetcakes". So I'll try.
This has been a severely abridged summary of these last 7 years. Man it's been that long? I just hope the future looks a bit kinder.
Ps. I take it back what I said in my last post here. WordPress is not better.
Posted by Vela at 9:09 PM