As I said a couple of posts below, I lost a significant chunk of my artistic abilities post psychosis. Nothing I drew turned out high quality, it couldn't be further away from the intense, skilled artist I was used to before my accident. Forms were horrid, colors bad, everything was off in a way that people around me said they couldn't see. I could see. I knew. I wasn't artist ME anymore, or so I thought.

It's been two or so years, and I didn't notice any difference. Excluding going on about the sheer agony of this situation, I'll say the thing I craved above all else, was to illustrate again. To (digitally) paint to be more specific. Just like how I had before my psychosis. That wonderous style I had grown into where colors merged and danced on the tip of the Wacom pen. All on one layer, no fiddle farting around with lineart on my watch. It was the way I was born to illustrate, I had felt. I finally broke free of being a sad slave to layers and lineart. It had a massive power, to craft lines and shapes of color at the same time. It just damn looks better ok? 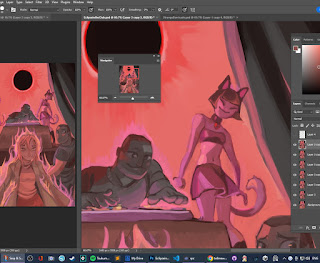 Post psychosis, all my drawing attempts turned out pitiful. Broken lumpy images, that I couldn't even verbally express to others what was wrong with them. People close to me were kind, saying I was still doing amazing work. But they couldn't see.

What happened to this yearning soul for painterly illustration? I sealed it away. In these tougher months I've done lineart, sketches, things I can manage because there are less elements going on in them. 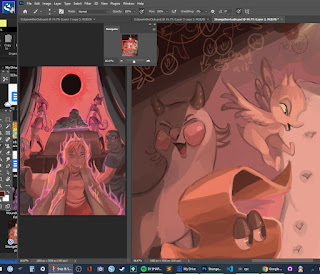 What I desired, was an ability to express a scene. To not just draw a pretty-cute character floating in an Instagram square like I had been for months, but to ground them in a world. My world. A world of visions, apparitions and gods. Like the artists I was obsessed with, I wanted something more from a still image. I wanted images with every element thoughtfully cultivated, to craft greater emotion and imply meaning.

That's where I am blogging to say, only in the last week, I have felt more confident about my art! Thing began to fall into place, forms looked better, colors seemed less hideous, dimension and atmosphere was somewhat there, everything began to have some appeal again, something which I had long discarded in my mind as being a lost cause for me. 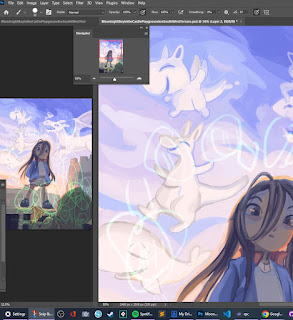 Only last few days, I started trying out some illustrations that aren't stupid floaty Instagram characters, and instead have environments. I have been scarily surprised with what I've been able to make

It is not like these works shine as strongly as my older illustrations (up on site alongside newer things). Color wise, they are sound, but often there is a little something lacking. A disappointing feeling which much to my anguish, I've endured since my psychosis.

Still, I am very proud of these attempts! Something is changing, a little something that is capable of drawing harder than before. My "art brain" healing, perhaps?  I'll take every little victory I can get, as it helps pull me out of the pits of depression, bit by bit. I hope someday I can smile brighter, knowing I conquered this dark time in my life.

I worry though, if I get up and leave my Cintiq, will this good energy/luck leave me yet again? Is it simply a bunch of flukes? I'm terrified, of this being inconsistent, of creating worse art sporadically because I am just plain broken. I've told myself I'm broken for this absence of art, year after year, for far too long. It needs to stop.

I want to craft stories. Moments in time. No just boring stagnant flat characters. It's hard when you can't draw like you used to. 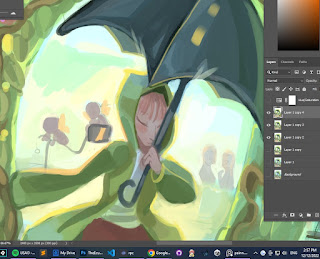 What has hurt the most is, people think being 'bad' at art is laziness. What they don't get is the way that 'brain trauma' can affect someone mysteriously. We haven't researched any of this garbage, it's stupid. I can work as hard as I possibly can, it hasn't improved by brute force. The more however, I have been telling myself I am loved and valid without my art, the more it seems to come back. I do believe in spiritual things, so a little bit of prayin' doesn't hurt. Maybe my heart needs the healin'. Maybe that's all I can do. That and blog to compartmentalize the feelings. Over and out.