This image was originally done over a week ago as a poster for a university club my friends and I had considering making. It's a sort of pile-of-pop-culture, a chaotic crossover of various popular video-gaming, comic, anime/animation and sci-fi characters, internet meme references and their corresponding paraphernalia. I spent the weekend at Oz Comic Con, which was good timing, as I was able to observe some of the more mainstream fandoms and toss them in the heap. Hopefully people can recognize at least one of the series depicted or at least, the general niche each character belongs to, but perhaps it will have the most resonance with my fellow mid' Generation Y's. 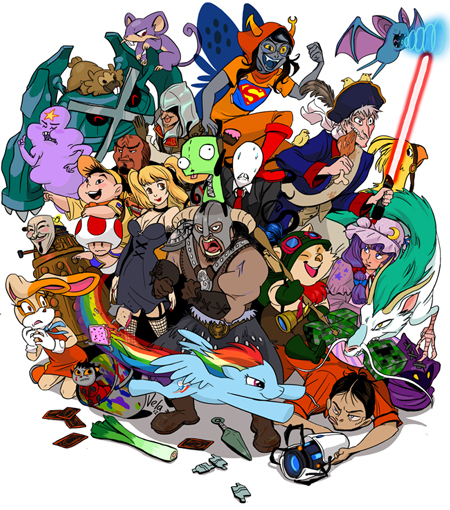 It was done completely digitally aside from concept sketches in my sketchbook, and I decided to implement the same vivid and simple coloring style throughout, to give all the assorted characters a homogeneous look.  Feel free to drop a comment naming the characters or references you recognize (or maybe ones you think should be here!)  I'm also curious to know if anyone thinks they can name em' all. ;)
Posted by Vela at 8:41 PM